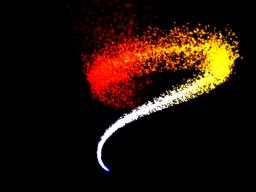 A new instancing demo is up. ATI users will need the new Catalyst 4.8 drivers to be able to use the instancing path.

Update:
The demo now includes the ability to change the particle spawn rate. Use the + and - keys for this.

Another update: Fixed a problem with resizing the window.Wester547
Sunday, August 22, 2004

Impressive use of the Instancing / Vertex Shader 2.0 specification techniques and [volumetric?] particle effects, keep up the great work man! ;-)