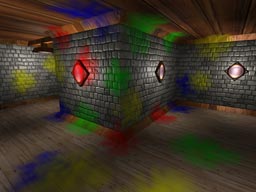 Required:
Direct3D 10
This demo illustrates a fairly simple technique for creating seamless decals on arbitrary geometry. This is done by rendering a convex volume (such as a sphere or a box) around the decal area. Using the screen position and the information in the depth buffer the local position within the decal volume is computed. This is then used as a texture coordinate into a volume texture containing the decal. To get unique looking decals a random rotation is applied on each individual decal volume.
The decal pass is rendered at the end of the g-buffer pass in a deferred renderer and simply alters the diffuse and specular intensity parts while leaving the normals unchanged. The lighting can then be done as usual.