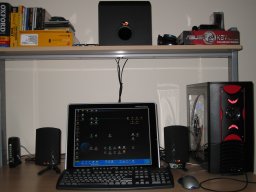 And yes, you can probably expect some new demos showing off the capabilities of the X800pro in the not too distant future.haha
Saturday, May 29, 2004

nice ^^
*hope my r9800pro can still run the upcoming demos

Don't forget to release the demos you are proud of (like spherical harmonic lighting (?)) ;-)

I'm still wondering... are you in the Application Research Group section ?

They didn't give you the XT= How cheap! :P

They didn't give you the XT? How cheap!

GianT,
no, I'm in developer relations.

Da3dalus,
well, it's one of the spare engineering samples. It was probably just laying around anyway, so it's better put it to use.Da3dalus
Saturday, May 29, 2004

If there are anymore engineering samples lying around, feel free to send one to me