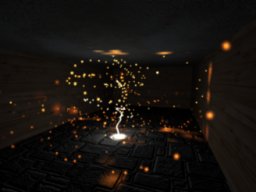 It was long overdue, but I've finally added a deferred shading demo to my site.
Enjoy!

Great, I decide to do a deferred shading demo using your frame work, and you beat me to the punch.
(re the emails I sent you)

Unable to test this awesome looking sample ATM, but does it also illustrate soft particles in DX10?Humus
Thursday, October 25, 2007

No, it doesn't, because the particles never cut through the walls anyway, so there's no point. However, it would be trivial to implement.Jeremy Shopf
Thursday, October 25, 2007

I usually don't do straight ports between APIs. But I might very well do a different deferred shading demo for OpenGL.Schmackbolzen
Monday, October 29, 2007

I don't know if the question was asked already, but since your both last demos were in DX10 I wonder why you did not choose OpenGL? DX10 is Vista only, for OpenGL it does not matter and from what I read the performance increase you should gain in DX10 through new driver model does not affect OpenGL, since the performance problems is a problem of the DX9 design alone.More pages: 1 2