"I have always wished that my computer would be as easy to use as my telephone. My wish has come true. I no longer know how to use my telephone."
- Bjarne Stroustrup
More pages: 1 2 New demo
Sunday, May 4, 2003 | Permalink 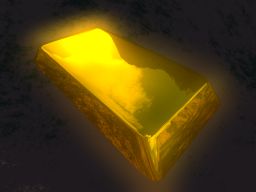 Another update: The new ATi Catalyst 3.4 drivers are out. These drivers fixes the problem with the shader not loading on ATi cards. It still needed a small bug workaround for another problem though to work, so you'll need to redownload this demo to get a working build.CybeRUS
Thursday, May 8, 2003

Hi!
Demo doesn't work correctly on my GeForceFX 5800 Ultra, with driver 43.80.
Glow effect too small and it's inside the gold brick.
Maybe scale don't work, it seems like scale i think.rwolf
Thursday, May 8, 2003

Wrong video card if you want good IQtwat
Thursday, May 8, 2003

That is one dumbass program. Crashed Explorer (I'm using Windows XP), then even though I ended the process in task manager the window still hung around.

The first and only time I have ever had a "reboot required" crash since I've been using XP and I'm a developer!

Get a grip man! You demos are normally excellent!
Humus
Thursday, May 8, 2003

Crashed Explorer, well, in any operating system worth its name an application should not be able to crash another application, but then MS has this wonderful "integration", they are so proud of ... which I prefer to refer to as application anarchy.

Anyway, this demo had some trouble yes, though the only way it can possibly hang as I see it is if it gets stuck in a driver call. Some problem where mine, some were ATi's drivers, and obviously some are nVidia's drivers. Currently the app works without a problem on ATi hardware with new drivers. Had a bug fixed for me in just two days. Working drivers for ATi are not public though.
On the nVidia side, due to a bug of mine it first set the vertex shader parameters on wrong context, so it didn't work. I've fixed that, and got it reported that it now worked on NV30 emulation. I've since updated the demo, and did a minor tweak just now. Either way, I guess CybeRUS's problem should be fixed. Try again.NeoKenobi
Friday, May 9, 2003

The demo doesn't seem to work properly on my Radeon 9700 pro. When I start the program, it says ERROR Line 70: Too many temporaries. And after that windows bumps up with a standard error to close the application.Humus
Friday, May 9, 2003

da fuck?
i have a radeon 9000pro win xp
and the demo doesn't work
why?
it says "open_gl_xxxfunction not suported by videocard"More pages: 1 2