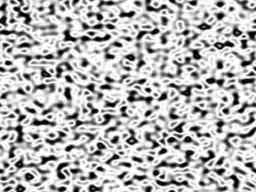 For doing Perlin noise you use a table of random values on which you apply a band pass filter. In this case the table is obviously a texture. In order to reduce the amount of texture accesses I have instead of just using a single channel texture mirrored the neighbor values in the other channels. So R it this texel, G is the one to the right, B is the one below and A is below right. This way I only need 2 texture accesses instead of 8 for each pixel.
This demo does the 2D noise function, but extending it to the 3D version should be straight-forward, with performance implication of course though. To get some kind of animation in this demo I just let the output be a simple function of the Perlin function and time.