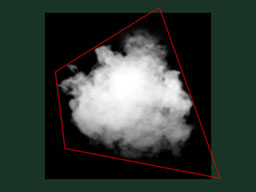 Download
This is a commandline tool that takes a source image of a particle as input and generates an optimized polygon that fully encloses the particle in as tight area as possible given the provided number of vertices allowed. This can save a considerable amount of fillrate on particle systems. You can specify the alpha threshold value to use when deciding what pixels belong to the particle and not. The tool also supports using an altas of particles provided the atlas tiles are all the same size.Planet wrapper
Thursday, May 8, 2008 | Permalink 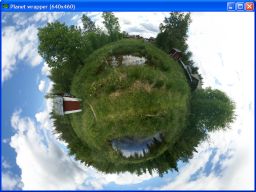 Download
This is a simple tool that takes a cubemap as input and projects it into a "mini-planet". Adjust with arrow keys, +/- and mouse wheel and press P to save the result in high-res to the desktop.GLOverride
Tuesday, July 5, 2005 | Permalink

Download
This is a tool that overrides various OpenGL rendering calls. It's thin of features at the moment, but it allows you to override multisampling and forcing alpha test into alpha-to-coverage. This will allow alpha-masked texture edges to look properly antialiased with multisampling.DXOverride
Tuesday, July 5, 2005 | Permalink

Download
This is a tool that overrides various Direct3D rendering calls. It's the equivalent to the OpenGL version above.3DcGenerator
Monday, May 31, 2004 | Permalink

Download
This is a small utility to generate normal maps compressed to the 3Dc format. It takes a heightmap or normal map in TGA, DDS, BMP, PNG, JPG or PCX as input and outputs a 3Dc format DDS file.

You need the texconv.exe file from the DirectX SDK to use it.MSVC Shader syntax highlighting
Tuesday, March 4, 2003 | Permalink 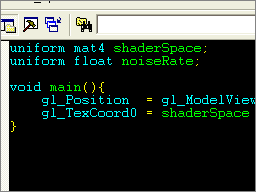 Download
Two small files are included that enables syntax highlighting of vertex and pixel shaders in MSVC 6.0, not sure if it works for MSVC.NET. It supports these shader languages:
To use it, just do these steps:


If you have included any shader files into a project already, MSVC will still think it's a normal text file. To solve that problem, just remove them from the project and include them again.
Hider
Thursday, October 11, 2001 | Permalink

Download
This is a small utility to hide and show windows. Can be useful hide apps that are running all the time to save some taskbar space, especially console apps such as Folding@home and similar.

Download
This is a small utility that takes a bmp file an converts it into a ASCII image
for posting on forums that supports the [COLOR] tag.
At this time it only supports 24 bit bmp files where width * 3 / 4 is an integer (I haven't taken care of aligning).
It supports a form of compression to take the size of the image down and various chars to build the image.

Use it with care, the images can be quite large, so use images no larger than maybe 64x64. Use the compression feature to as high extent as possible without ruining the image.