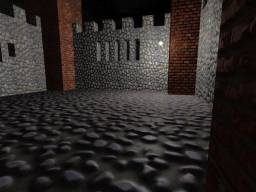 Required:
GLSL
This demo implements a variation of Ambient Aperture Lighting. I went with a simpler implementation than what's in the paper, but the concept is the same. The idea behind ambient aperture lighting is that you approximate the directions from where light can reach the surface with a disc. So you store a direction vector to the centre of the disc and the size of the disc. In the more elaborate version in the paper they compute the intersection area between the light disc and the aperture disc. In my implementation I simply take the dot product between the light vector and the aperture direction, and the difference between that aperture size as the shadow factor.

The advantage of this method compared to horizon mapping, which can be used for the same purpose, is that it's cheaper. Horizon mapping require a 3D texture, plus either complex math or a cube lookup table for the angles. Ambient aperture lighting requires a 2D texture only. Horizon mapping is also more aliasing prone and there's also a problem with texture coordinate discontinuity when accessing the horizon map, meaning that you either can't mipmap it (more aliasing) or you'll have to use a lookup with gradients (only supported in SM3.0 hardware) to avoid artifacts. Additionally, a benefit of ambient aperture lighting is that the size of the aperture is pretty much an ambient occlusion factor and can thus be used for a better looking ambient lighting (see the outside of the castle in this demo for example). However, in horizon mapping's defence, it is a better approximation of the occluding geometry so you can find cases where it will look more natural than ambient aperture lighting.