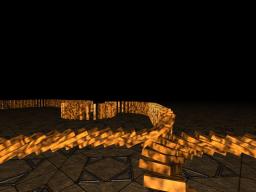 Required:
GLSL
This demo is mostly for eye-candy, but contains a couple of interesting techniques too. OpenGL currently has no particular API for doing instancing. There exist some pseudo-instancing techniques for OpenGL, such as using a vertex attribute and issuing a new draw call. This of course does not cut down the number of draw calls, but should have relatively low cost per call, making drawing lots of objects managable compared to for instance setting shader constants. Another method, which this demo uses, is based on shader constants. It uses multiple copies of the model in the vertex buffer, each with a particular index. The index is used to grab the instance data from a constant array. This allows you to draw as many instances in a draw call as you can fit instance data in the vertex shader constant storage. While this doesn't cut the number of draw calls down to a single one it at least divides the number of draw calls by a fair amount, in this demo 64 (set conservatively, could probably be increased).

The other interesting technique used here is the wood shader, which is loosely based on the wood shader that comes with RenderMonkey. The RenderMonkey wood shader suffers from a serious aliasing problem at a distance since the wood rings are mathematically generated. To solve this problem I'm deriving the rings from the noise texture too, which of course is mipmapped and thus doesn't suffer directly. I added a repeat factor on the returned noise, which adds back some aliasing, which I get rid of by adding a mipmap bias for the lookup.