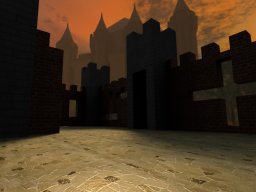 2006-02-11 update:
I've now fixed the GameEngine2 problem, plus fixed a couple of bugs I found during this process. I also recompiled the older demos based on Framework3 and uploaded new versions so they also got the interface update (you can now select your own keys).sqrt[-1]
Tuesday, February 7, 2006

On my Geforce6 I found that the aliasing artifacts went away if I resized the screen by one pixel.

I don't think this is any "magic" as while the specular is still there, it is less defined. My guess is that the normalmap is not using the highest mip levels after a resize. (tested at different starting resolutions and it still happens)overlord
Tuesday, February 7, 2006

i don't see how this is more "effective"Humus
Tuesday, February 7, 2006

sqrt[-1], late yesterday I noticed I have a bug in the framework that doesn't reenable anisotropic when the device is reset, so that causes it to become a bit blurry instead. I haven't had time to fix it yet, but I'll do that tonight.overlord
Tuesday, February 14, 2006

tEd: it's more effective because it runs at about 2 times the speed and produce a better result.
(based on 0 samples with full FSAA compared with 11 samples without FSAA)

Dynamic branching allways results in a framerate of about 1/3 of the one without.tEd
Tuesday, February 14, 2006

i don't understand how 2x SS samples can look better than 11 samples. I would say something is fishy and not working right.Humus
Tuesday, February 14, 2006

overlord, are you looking at the right place? This supersampling method won't do anything about the polygon edges, if that's where you're looking, but only the specular aliasing on the floor.overlord
Wednesday, February 15, 2006

no, i mean the floors to.
11 SSS, no aa = 21fps
no SSS, 8xs aa = 29 fps <- about the same result as above
3 SSS, 8xs aa = 23 fps <- best quality by far, more samples does not do anything.
If you run it at the only resolution worth testing at, 2048x1536.
But other resolutions do show the same pattern.
Allthough any AA lower than 8xs does produce artifacts along the edges of the polygons.
And this is something i have never seen anywhere ealse.More pages: 1 2 3