"Am I not destroying my enemies when I make friends of them?"
- Abraham Lincoln
More pages: 1 2 Phone-wire AA
Tuesday, June 26, 2012 | Permalink 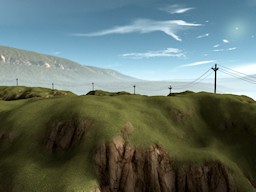 I have a new demo illustrating a simple but effective way to deal with the typical aliasing problem on thin geometry, in particular phone-wires which are quite common in games and typically appear as a bunch of random disconnected dots at a distance. MSAA can only reduce the problem a bit, but doesn't fully solve it. This technique solves the problem and creates wires that look natural at any distance.Tisten
Tuesday, June 26, 2012

Switching from alpha blend to alpha to coverage at 4xMSAA doesn't look as good but at least let you avoid depth sorting...

Can't decide what I dislike the most, depth sorting or having few alpha levels.Greg
Tuesday, June 26, 2012

...looking again at my proj matrix code makes me realize that the 4th row reflects indeed what you are saying

How does this work in conjunction with your GPAA and GBAA, does it integrate well and does it give much of a performance hit compared to say MSAA or Supersample?Humus
Thursday, August 2, 2012

I haven't tested with GPAA or GBAA, but gut feeling is that it should work OK. You may need to clamp to a slightly wider wire than one pixel, maybe, but I guess that should be OK. I tried quickly with FXAA, which worked OK, although not quite the same quality as with MSAA.D
Monday, January 21, 2013