"Not since government devoted itself to race biology have such an extreme ideology been deemed clean. But now the racism has returned. Back then niggers were stupid, vagrants were dirty, gypsies were thieves and jews were greedy. Now it is men that are guilty. Only by being men."
- Johan Hakelius, Aftonbladet
Siggraph presentations online
Monday, August 20, 2012 | Permalink 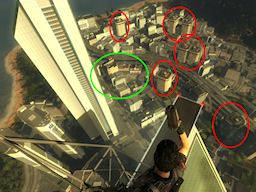 I have added the slide decks from my presentations at Siggraph to the otherwise much underutilized Articles section of this site, complete now with extensive notes to each slide.Bart Kuipers
Monday, August 20, 2012

Thanks a lot! I really love these articles! You kept me busy all morning reading those. Especially the bonus sheet (nr 40) in the 'creating vast gameworlds' kept me busy for a while. I was trying to find out how you simplified C.x back to f/n

Dunno why I just had to type that out, but it took me a while to figure it out, so maybe if someone else reads this, he/she might get it as well

What's the advantage of the RG32F encoding of the tangents versus two ubyte4s? I can imagine that paying the extra shader decode cost was worth it compared to the cost of of the extra attribute on some platform, but did you do this on all platforms?

(If there are written notes accompanying the slides explaining this, they aren't visible in MS PowerPoint Viewer.)Bart Kuipers
Monday, August 20, 2012

@Sean B: From the notes in the slides: "Further we packed the remaining two vectors into floats. This does not reduce the storage space, but takes away another vertex attribute. Trading a small amount of ALU for one less vertex attribute turned out a performance gain in practice."Humus
Wednesday, August 22, 2012

Sean B, we did it on all platforms. I don't know for sure if it really helps on for instance modern GPUs on PC, but they usually have a vast abundance of vertex shading performance vs. say the PS3, so if it wasn't faster at least it probably wasn't measurably slower. I believe it was faster on both consoles though.Jack
Wednesday, October 10, 2012

This website is inspirational, you are a generous and skilled engineer, thank you and don't stop

I saw XBOX720 spec that showed EDRAM accessible by both GPU and CPU ... that could be an interesting toy for you?Chalabi
Monday, December 31, 2012

I used my credit card to purchase more gold in your game I couldn't remember my Googel password so I couldn't make the purchase Im looking for someone to answer a commentsimple ?!! for me about the privacy policy your game has to secure my information I have looked and read for almost an hour and have not found anything that tells me hey this is safe for you to use your credit card I understand that im on a comment board but I have gone every where to get answers on this serious matter if any one can respond to help me know where to look where it states that it says that this is by law a secure game website for the use of private info that would be GREAT THANKS