"A government that robs Peter to pay Paul can always depend upon the support of Paul."
- George Bernard Shaw
New textures section
Sunday, October 29, 2006 | Permalink 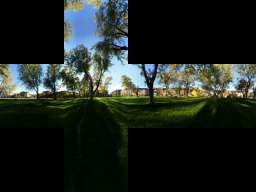 Recently I've renewed my interest in photography, in particular after upgrading to a new digital camera. One of the things I've played with a lot is creating cubemaps from photos, something you've been able to see in my last couple of galleries. The versions I've uploaded there are only small resolution though intended for interactive viewing on the web. The source cubemaps I've rendered out on my computer are typically much higher resolution than that though. Also, for the galleries I've primarily selected cubemaps that are interesting in the context of the gallery, but there are a whole bunch of other cubemaps I've made that hasn't made it into a gallery. Since there are very few good cubemap resources on the web (at least I'm not aware of too many, and the ones I know have only computer generated environments), I thought I should do that.

I've added a new Textures section to this site, and you can see the link in the menu on the left. I've uploaded 7 cubemaps so far and they are all high resolution ( 2048x2048 ).