"Politicians have actually solved some problems they created themselves. There is some hope."
- Assar Lindbeck, national-economist
More pages: 1 2 3 New demo
Tuesday, December 11, 2007 | Permalink 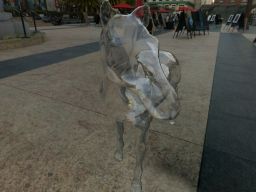 That sounds pretty interesting. Is there any way to get the same effect in OpenGL?Humus
Wednesday, December 12, 2007

AFAIK there's no extension for accessing the individual samples in OpenGL, so there's no way to do the sorting currently.Nuninho1980
Wednesday, December 12, 2007

I do force v-sync - ON in nvidia control panel but this demo hasn't v-sync! :S :S

Sounds like something useful to add to Mt Evans...Vilem Otte
Tuesday, December 18, 2007

Humus, are you gonna to write some demos under OpenGL? Maybe this one (With another solution of course)Vilem Otte
Tuesday, December 18, 2007

Well, i've got an idea how to preform this-like effect under OpenGL. Using several render buffers of course. I'll try that

I hadn't seen demo, cause I've not got Vista. But I think it's transculency, that render transculent parts of object (or another object) inside transculent material (with frensel reflection), am I right?More pages: 1 2 3