"I don't know the key to success, but the key to failure is trying to please everybody."
- Bill Cosby
More pages: 1 2 Demo updates for Linux
Sunday, October 10, 2004 | Permalink 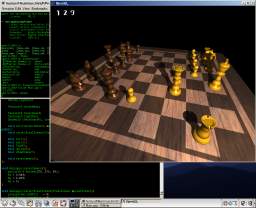 I've gone through a whole bunch of demos to ensure they all still compile in Linux. I have made some fixes to the frameworks to get it to run and finally added render to texture support in Linux. This means that in addition to all the demos that worked in Linux before the following demos now works fine in Linux as well:

i have tried to compile your Chess-demo but it doesn't work.

I have downloaded the framework too. It seems that the framework doesn't contain the ../Framework/Math/Plane.cppHumus
Sunday, October 10, 2004

There are two frameworks, one for older demos (Framework.zip) and one that newer demos uses (Framework2.zip). Chess is based on the first framework, so you'll have to download that instead. And if you did, it's probably just a matter of getting the directory structure right. It should be like this:
<base dir>/Chess
<base dir>/Textures
<base dir>/Models
<base dir>/FrameworkExxtreme
Sunday, October 10, 2004

Thank. It compiles properly but when i try to start your app, i'll get a memory access error.

You should really think of making you flag and cloth demos into Xscreensavers, they simply rock!! (I caught my self SATAIRING at them for almost AN HOUR!!!)

Which text editor is on this screenshot (below the chess window)?Jon Jonsson
Monday, October 11, 2004

Hi
nice artwork, however with current fglrx driver for linux some demos just don't work (eg the flag demo), because of missing glsl support under linux. Time to do some driver updates from ati, eh ?
Also the chess demo gives me an segmentation fault when running under linux.

Thetargos,
I could look into making screensavers of it, but I have never written any screensaver for Linux before so I don't how much work that will be. I googled a bit on it but didn't find any good resources. Do you know any good Linux screensaver programming links?Humus
Monday, October 11, 2004