"Congress is so strange. A man gets up to speak and says nothing. Nobody listens - and then everybody disagrees."
- Boris Marshalov
More pages: 1 2 3 Soft coronas demo
Monday, January 27, 2003 | Permalink 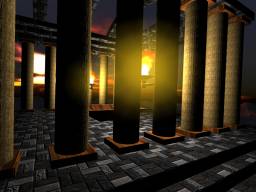 With a loud thud a new demo hits the face of earth. This time it's soft coronas through occlusion queries.
Hit the headline and head for the download.

At last, thanks for a nice demo!

Ah, a porting problem. The function is of course supposed to be virtual.

Will update the framework right away and fix the Linux executable the next time I boot into Linux.Anonymous
Wednesday, January 29, 2003

Alright, the Linux executable is updated for those who don't feel like compiling it yourself.

That would require me to do dynamic linking to OpenAL, which would be much more painful than static linking. Given the amount of people having trouble I'll consider this in the future anyway.Z
Friday, January 31, 2003

When I begin run the enforcement, a message of error appears saying "Invalid suffix on number"

After this, the demo works well, but all models are
transpicuousHumus
Friday, January 31, 2003

Download the demo again. That was a problem I fixed recently.More pages: 1 2 3