I have now removed UniTuner from this site. It's officially dead now.
I also removed the "Drivers and Utilities" section. It's very limited contents was pretty old and useless; I don't think anyone will miss it.
I have done some other minor tweaks to the site too.

I've been working for a while now getting my framework to compile under Linux with g++. I have come a long way already, in fact most of the really important stuff has already been ported. The renderer works fine, except rendering to texture is not implemented for Linux because there's no GLX version of WGL_ARB_render_texture yet. Basically, only the base application has yet to be defined.
The math stuff compiled just fine with g++ without change. The imaging stuff made some resistance, but wasn't too hard to convince to compile, lot of warnings but usually easy to fix. The renderer was a little troublesome, but I eventually got it all figured out. The extension library caused some major clashes with the glext.h file that automatically gets included in the gl.h header in Linux and a few other aspects of the Linux version of this file. A few small hacks and that was mostly solved though.

I must say I'm impressed by the quality of the g++ compiler. It may be a little more sensitive and generate more warnings, but that's just great really, it helped me find errors in my code MSVC never complained about, like returning NULL from a bool function without a cast. Overall my code got a little cleaner after letting g++ state it's opinions.

ATi has taken a large step forward in terms of Linux support in my eyes with the new drivers from a few days ago. I had severe trouble with the previous Linux driver and never got it to work, with this driver however I got it up and running quite soon with little trouble. I'm posting this news from within Mandrake Linux 9.0 now and have runned a variety of 3d applications and have had success in every case. Heh, btw, Tux Racer rox.

I suppose there's some kind of counterpart to the wglGetExtensionString() call in Linux for GLX specific stuff, but I'm still a newbie in this, but expect some Linux demos in the future. I'm not sure how much effort I'll need to put into convincing my framework to run in Linux, but it won't be a quicky.

Well, the other day I got contacted by Wolfgang Engel, the editor of the ShaderX book. It's a book about vertex and pixel shader programming containing lots of tricks and tips about shading with many more or less wellknown authors from the industry contributing, like Jason Mitchell, Chris Brennan and Evan Hart from ATi and a lot of other guys from ATi, nVidia, Matrox etc. This book was published this summer and seams to have sold quite well.
Late summer 2003 a new version of this book is due, called Shader X2 of course, and as it looks right now I'm going to be one of the contributors this time.

Wolfgang Engel suggested I write an article about the techniques shown in my Phong and Mandelbrot demos and I have at least sent him the proposal of an article based on the techniques in the Phong demo. The current contributors can be found here; you'll find me there under my real name, Emil Persson.
This is kinda exciting in one way. It'll be my first real publication, even though my contribution may only be a small number of pages in a book of 500 pages or so.

The news of a new Linux driver from ATi supporting the 8x00 and 9x00 series cards really came as a pleasant surprise.

I didn't quite expect it and I feel I must apologize to ATi for my comment in the last rant (" ... linux support (a large market I'm still waiting on ATi to give a rat's ass about) ... ").

I guess by now noone really have missed the launch of the GeForce FX. This next chip from nVidia which is supposed to move the King of 3D title back to nVidia again has been met by mixed feelings from media, gamers and developers. We have heard everything from "rocks" to "sucks". Here's my take ...

I'm certain the card will rock. There are certainly strong points of this chip where it outdoes the Radeon 9700, like longer fragment programs, up to 32 bits/channel operation, more flexible math etc. There are also weak points, like floating point textures being limited to texture_rectangle only, while the 9700 can do any of 1D/2D/3D/cubemap/texture_rectangle. All this is nice and dandy, but there's a trend that worries me. I have been expecting that the graphic market would mature over the years, but I guess I've been proven wrong, with both good and bad consequences ...

The good part first, I expected graphics to slow down in progress a little, less performance boost between generations, less new and exciting features, like where the audio card industry is today. The Radeon 9700 really proved me wrong. It outperformed anything on the market, especially with anisotropic and antialiasing maxed out where it won with an order of magnitude higher performance than earlier and competing chips. It also came with a large set of new features and I currently find myself in a situation where I have a lot more possibilities than ever. The step is larger than what I felt going from my G400 to Radeon and from the Radeon to Radeon 8500.

The bad part, which worries me a little, is that the extremely competive nature of the graphic industry is leading us (maybe with no return) into a direction where we don't really want to go. What I'm thinking of is the vacuum cleaner nVidia has attached to their GeForce FX chips.

Let's go back in time a little. Back in the old days, not even CPUs had active cooling. When chips started to appear which required active cooling people had a little hard to accept it at first, but over time people have gotten used to it. Today everyone takes for granted that a CPU should have a monstrous heatsink with a loud fan attached to it and noone reflects over the fact that the little thing uses more power than a lightbulb. I guess electricity simply is to cheap for anyone to care, but many do care about the noise. I certainly do.
Now take a look at graphic cards. My VoodooII was fine with with passive cooling. So was my G400. My Radeon had a small fan. My Radeon 8500 had a small fan. My Radeon 9700 has a slightly larger fan and requires extra power from a HD connector. The Voodoo 5 had a similar solution, but people bashed it for it's ridicolous power consumption. Noone complained about the 9700 requiring it. Maybe because it was so much ahead of everything else, something you couldn't say about the Voodoo 5. Now the GeForce FX arrives, also requiring extra power from a HD connector. Additionally, it comes with a vacuum cleaner attached to it to keep it cool. Of course nVidia pushes the thing as a revolutionary cooling solution and some people will drool over it as if it's the coolest thing ever. But I'll tell you something, this is NOT progress. This is a step towards somewhere we don't want to go. Computers are already noisy enough. I was delighted to read that the new Athlon 64 was running quite cool due to the SOI process. That's progress! If a vacuum cleaner attached to your graphic card is what it takes to beat a competitor, then I think it's time to get back to the drawing board; and rethink your strategies.

It keeps amazing me that performance still is the main selling point of graphic boards. One would expect that in this time and age people would start to value other attributes a little higher, most games do already run fine in high resolution with anisotropic and antialiasing. It's time to move along. Graphic companies need to start pushing other attributes. There's no shame of being slower, even if you release your card later. The GeForce FX has enough new cool stuff to be able to sell without requiring it's own ventilation system and filling both the AGP and a PCI slot. Just clock that darn thing at level it can handle! Power consumption scales quite linearly with clock speed, and quadratically with voltage. Just lower the clock a little; which might mean you can turn the voltage down a little too; with the result of slightly less performance, but without the need of a vacuum cleaner; and thus probably a more affordable price in the end for the customer. There are so many attributes of the card that nVidia could push instead, like features, driver quality, linux support (a large market I'm still waiting on ATi to give a rat's ass about) etc. It doesn't need to outperform the 9700 to be worth it's price. In all honesty though, the "silent computing" thing is progress. That's a really good feature I hope to see from more vendors. No need to run a fan at full speed when the chip doesn't have a whole lot of work to do. I don't buy the claims that it doesn't matter if the thing is noisy during a gaming session. Sure, partly true for high speed action games like UT, but not true for other games. You don't want air flow noise to disturb you while playing Unreal/Doom3 style games.
Anyway, lots of words here; what I really wanted to say is just this: Please, don't make noisy computing the norm of the future. 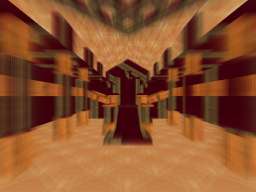 Two new demos up. Motion blur and depth of field.