So I left a comment over at Wolfgang Engel's place. And this is what the site's anti-bot system system asks me to type: 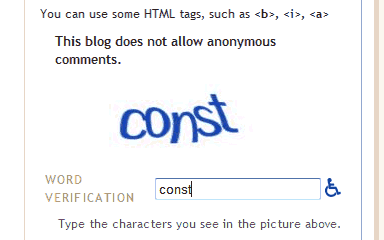 If you're not programmer you may not see what's so cool about it, but out of the set of random characters I found it a bit amazing that I got a C++ keyword.

Speaking of const, it's one of my favorite keywords. However, I often see code where it's not used at all, or not nearly as much as it should be. I tend to use it as often as possible and I'd encourage everyone to do the same. It's good for you.

Over the holidays I began some work on a new framework. I'm building it around DX11; however, I'm still making it reasonably platform independent and I plan to put OpenGL 3.0 and Linux support in there at some point too. So far I haven't done much, but at least I have a window and DX11 device up and running. Yay!

There are a few changes I'm making to the overall structure of the code. One is of course to separate the rendering context from the device in order to be able to take advantage of DX11 deferred contexts, AFA command buffers. Another change I'm making is to try to resolve more stuff on link time rather than at runtime. In previous frameworks I've had base classes with virtual functions that subclasses implemented. For instance D3D10Renderer and OpenGLRenderer inheriting from Renderer. However, since I'm always using one or the other and never both in the same app it adds unnecessary overhead. Not that this overhead was ever a problem, but it just feels better to do it right.

So instead I'll create a common interface, and just add the right implementation to each project.

Another change is that I'll use a better coding style. As a self-learned coder I've been using many odd coding practices throughout the years. Slowly I've adapted to common industry conventions, but Framework3 was still based on a lot of old coding style preferences which I never bothered to change, because I'd rather be consistent than mix conventions. With the clean break with Framework4 I'll now be using "m_" on member variables and "{" will be on its own line etc.

Another thing I recently noticed is that I've been sort of anonymous for I don't know how long. I know I stated my name and occupation on this site in the past and I never really intended to hide who I am. I suppose when I rewrote the whole website a couple of years ago those bits got lost. In any case I've fixed that now and changed the "Contact" page into an "About Humus" page, which also holds the contact info in addition to a few words about who I am.

By popular request I've finally added an RSS feed to this website. For some reason Firefox refused to load my permalinks, but using start=X like on the front page worked fine. Not sure what up with that, but I suppose start=X links are OK since the feed should always be up to date with the front page anyway. I've tested it in Firefox only though, so I don't know how it'll work with any other RSS readers. Let me know if there are any issues with it.

Just back again after being pretty much disconnected from the world for the last two weeks. As usual I spent the holidays with my family in the north of Sweden. The winter may be cold up there usually (although I dodged the worst this time with mostly around -5°C to -10°C and only this last morning did it dip down to -24°C); however, it's also very beautiful. Occasionally you may be able to see some polar stratospheric clouds (AKA nacreous clouds), which I was able to snap a series of pictures of.

Today I returned to a slightly snowy Stockholm. Although it's not as pretty as up north this winter is still turning out much better than the last one so far. Last winter was more or less just a long autumn with mostly cold rain and essentially no snow until late March. So I'm happy we're having snow at all.

Speaking of aperture and bokeh, one cool photography trick is to create a shaped aperture instead of the regular sphere or polygonal shape that you'll find in lenses. You can do this by putting a piece of cardboard onto the front of the lens with a hole cut out of it. If you make the hole small enough, say a couple of millimeters or so, it'll turn into your new aperture. You can shape the hole into anything you like and the bokeh will be shaped in the same way. The results are best if you use a lens with a large aperture, but you can get pretty good results even with regular lenses. This is what I got when I took a picture through the window in the dark Swedish winter night with a heart shaped aperture on a standard kit lens. 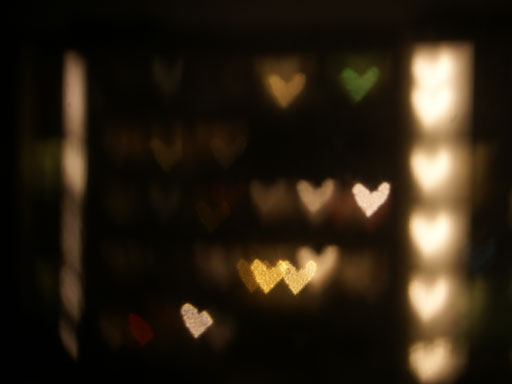 For my first entry in my new blogging effort I'm going to talk about depth of field, which is a particularly interesting subject given both my graphics programming and photography interests. My former boss Andreas Thorsén sent me this interesting blog post on the subject.

First thing first, I agree with Vincent that "current depth of field effects in games fall short of delivering the same cinematic emotion as movies and TV", or as I would put it: they generally suck. My pet peeve with depth of field as typically implemented is that there's no smooth transition between sharp and out of focus areas. Many games implement depth of field by taking the framebuffer and blurring it. Then the sharpness is controlled by linearly interpolating between the sharp and blurry image. This is generally cheap, especially since you probably already have a blurred version of the framebuffer around anyway for other posteffects such as bloom. However, except in the fully sharp and fully blurry areas the quality leaves a lot of be desired. Object edges aren't going to be smoothly blurred, but instead you'll see a sharp edge with some sort of halo blended on top of it. Not exactly what you want. What you really want is a blur kernel with an adjustable radius. Unfortunately, that's also a lot more expensive.

Now that wasn't what Vincent complained about in his post on the subject. He is complaining that the bokeh (that's "out of focus blur" for you non-photographers) in games isn't anywhere close to what you see in movies or on TV. Instead of the gaussian blur that's commonly applied by games he's suggesting a filter similar to "lens blur" in Photoshop with disc shaped blobs of out of focus light sources. Personally I'm not convinced this is better though. Even though this is the result you'll see in most photos it's not exactly "the gold standard" either. Many photographers (including myself) considers this an artifact, just like for instance lens-flares. Not that that has ever stopped game developers from adding it to their games.

The shape of the blobs depends on the aperture of the lens. Lenses with adjustable aperture generally are created by a bunch blades. The higher the number of blades the closer to a circle the aperture will be. On a cheap lens you might see something like an octagon shape whereas with more expensive lenses it will look almost circular. The reason you're seeing a blob rather that something softer like a gaussian falloff is because the aperture has hard eges. The question is if that's desirable. Producers of highend lenses tend to not agree. Hence there are some highend lenses that contain special elements in order to produce softer bokeh and remove the blob effect, like for instance this one. If you compare the 80-200@F4.5 and 135 STF@F4.5 example images on that site I'm sure most will agree with me that the latter is the better looking image.

With that said, what's best is of course highly subjective. I'm sure there are people that prefer blobbier bokeh, and other lens artifacts such as flares, vignetting, scratches etc. has been used for artistic reasons before. Since people are used to seeing blobby bokeh I'm sure that effect has its place too.

As you might know, this site has been around for quite a while. I'm not sure when it first came online, but my oldest demo is from the year 2000. So at least 8 years, maybe 9. It started as a traditional personal homepage and has more or less stayed that way, except maybe that I added the "news" section (the one you're currently reading) a couple of years into its existance.

However, as you may have noticed I'm not posting much news anyway. The news I'm posting is mostly about new content on the site, such as demos, cubemaps or galleries. Hence there may be months between each update. So at times it may seem like I'm not working on any new projects. However, a majority of the projects I start on never result in a demo and leave no visible trace of having ever been worked on. Only once I've finished a demo do you see a news item here. So if several of the ideas I've been experimenting with have failed I sometimes get somewhat uncomfortable with the fact that there has been several months without a website update.

So the other day I was discussing programming blogs with some friends. I was asked why I'm not blogging and was told I really should, which when I thought about it is a very good idea. I figure people might be interested in what projects I'm working on, and when projects fail it's a good idea to post about it and why it failed. It may help other people that are attempting things in the same field and hopefully I might get some feedback that can turn some of those projects around into something that actually works. And it should make it more visible that I'm working on stuff and relieve me from any stress related from not having been able to publish any finished demo in a while. Further I think it may be a good idea to put down my thoughts from time to time on subjects such as interesting rendering techniques. Since I'm also into photography I suppose there might be a post or two about that too from time to time.

Now, I don't think I'll be posting on a daily basis, but from now on this site should turn somewhat more blog-like, although there won't be any other change than more frequent posting. And with just days from my holiday vacation it's perhaps an odd timing to announce a new effort given that the next few weeks are likely to be quite silent.

But hey, a soft start might be a good thing.